Last night Jacob and I, along with my nephew and my Sister-In-Law, went to the Carson & Barnes Circus. We had a really great time! We got there early which was good because they have a small carnival area.

Jacob and Camden had fun going on a train ride and a huge inflatable slide.

They also had camels and elephants available to ride. The highlight of my evening (and probably my week) was taking a ride on an elephant!

After the fun outside we headed into the big tent. It was much smaller than I had expected it to be but a lot bigger than it looked from the outside. We found seats up high where we had a good view of everything. The seating was in bleachers which became uncomfortable after a while but they also had more comfortable seating areas for a few dollars more which I recommend investing in.

After we found our seats we took turns getting food. The food was decently priced. We got a hot dog and some cotton candy. I also got the boys light up toys to wave in the dark tent.

Once we started eating the show started. The performer called the “King of Comedy” at the circus, Alex, was pretty funny in his antics. The acts came from all around the world and we really enjoyed watching their amazing stunts. I tried to get pictures but they all came out blurry or badly lit so I grabbed some pictures from the circus website to share: 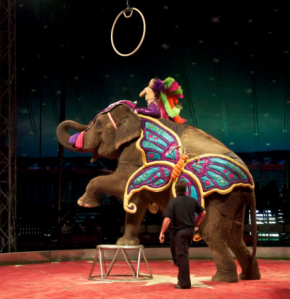 If you would like more information on the Carson & Barnes Circus you can visit their website. A worker at the circus said that they travel the United States for 8 months out of the year. You can see a list of their stops here (though it only shows about a month at a time).

(Disclosure: I received tickets to the circus for my family to go but all thoughts are my own.)

Blogging For A Cause

This work by http://www.makingtimeformommy.com is licensed under a Creative Commons Attribution-Noncommercial-No Derivative Works 3.0 United States License.

It’s Cool To Be Green