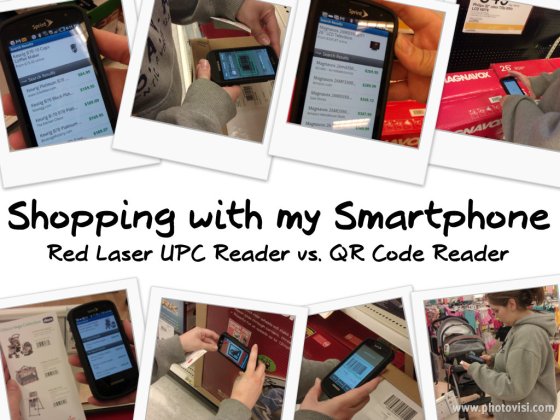 I recently headed to Target to try out two smartphone applications, the Red Laser UPC scanner and the QR code reader. I will admit that normally when I am out shopping with my children the last thing on my mind is scanning bar codes and QR codes. I’m usually just trying to get out of the store without my two year old’s meltdowns or my one year old twisting his way out of his cart’s seat belt (seriously need duct tape to keep that kid in his seat). I decided to try these two applications this time and wanted to share my findings.

Red Laser UPC scanner– To use this application you just press “scan” and then center the product’s bar code in the center of the box and the phone reads the barcode. It then brings up a screen with a list of places the product can be found and the price they are on each website or at each store. Out of the six items I scanned all were in the system. I thought the prices were up to date as I noticed the Uno! Moo game I scanned was on sale for $14 and Red Laser told me that’s how much it was at Target. I liked that the application kept a list of the items I had scanned so if I was comparison shopping or wanted to do more research at home later I could look back at the items I had scanned.

QR Code Reader– The QR Reader reads a two dimensional code that is about the size of a postage stamp. I found this particular application kept freezing up my phone. When I did get the application to open properly I would hold it up to a QR code and it would keep bringing the code into focus, then going out of focus, then coming back into focus repeatedly. I didn’t get it to actually scan anything in store. On a side note, once at home I tried to do two codes off my computer screen and it did work one time. I think that was because I steadied my phone by resting my elbows on my desk. In reality though, when I am at the store I have to just be able to hold my phone up to the code because I wouldn’t be able to completely steady my outreached hand. The “look” of this application and the setup of the lists was not as nice as the Red Laser application.

While I had never thought using one of these applications was worth my time I could see using them in future shopping trips. Each one had a feature that let me send the product I had scanned or the list of all the products I had scanned to someone. This would be  great when shopping for someone else or when one person goes to buy something and wants to consult their significant other before buying it.

As of right now I would use the UPC code reader over the QR code reader because there just aren’t enough QR codes on products yet. I looked  all over the store for some and only found a few (one on a movie, one on a TV, and one on an outdoor toy). The particular QR Code Reader I used froze my phone repeatedly and would not scan the codes which when I’m in a hurry I won’t want to deal with.

What do you think? Have you ever used a QR Code Scanner or a UPC Code Scanner? Would you use them? Why or why not?

(Disclosure: This project has been compensated as part of a social shopper insights study for Collective Bias. All thoughts about the applications are my own.)

One thought on “Shopping With My Smartphone: UPC Codes vs. QR Codes”

Blogging For A Cause

This work by http://www.makingtimeformommy.com is licensed under a Creative Commons Attribution-Noncommercial-No Derivative Works 3.0 United States License.

It’s Cool To Be Green